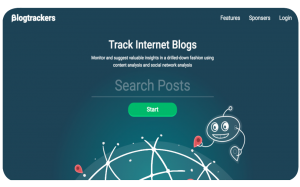 COSMOS is among the very few universities in the country with a team and projects dedicated to researching blogs.  In 2009, COSMOS Director Dr. Nitin Agarwal developed a program called Btracker, a tool designed to track and analyze blogs and gain insights from the blogosphere. Through Btracker, COSMOS has been actively working on research studies that are supported by grants from the U.S. Office of Naval Research in the fight against cyber propaganda campaigns and tracked how anti-NATO groups reacted to information released during NATO’s exercises. Agarwal and Muhammad Nihal Hussain, a fifth-year doctoral student in information science and a core researcher at COSMOS, also have trained NATO personnel to use Btracker to analyze how false information and fake news stories are spread through social media.

This research project funded by the U.S. Office of Naval Research (ONR), provides decision makers data analytical tools to monitor and track blogosphere. A variety of analytical measures are available for analysts to examine the influential bloggers, sentiments and affects, traffic trends, posting frequency, blog profiles, metadata, blog networks and communities, among others.