Research explores how online narratives on refugees shift over time. 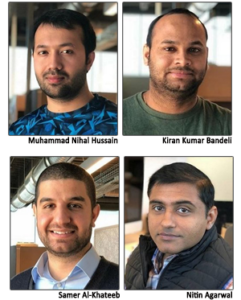 A group of researchers from the University of Arkansas at Little Rock are studying how the mass migration of refugees from Middle Eastern and North African countries into Europe has created a shift in the migrant narrative in online communication.

The paper, “Analyzing Shift in Narratives Regarding Migrants in Europe via Blogosphere,” has been accepted in the Text2Story18 workshop at the 40th annual European Conference on Information Retrieval, a premier conference in information retrieval, to be held March 26-29 in Grenoble, France.

The lead author of the paper, Muhammad Nihal Hussain, a fifth-year doctoral student in information science and a researcher at COSMOS (Collaboratorium for Social Media and Online Behavioral Studies) – a research group led by Dr. Nitin Agarwal, Jerry L. Maulden-Entergy Endowed Chair and Distinguished Professor of Information Science, will travel to France to present the research at the conference.

The researchers analyzed blogs to study a shift in narratives in the blogosphere toward refugees or migrants in Europe from 2015 to 2016. They used the Blogtrackers tool to analyze more than 9,000 posts that talked about the influx of migrants and refugees from the Middle East and North African countries in Europe.

“Social media is largely considered as a great democratizing platform,” Agarwal said. “However, not all voices are heard equally. Rather, only a few narratives get amplified, creating a democratic deficit. At a time where falsehoods travel faster and farther than truth, being able to computationally identify leading narratives would tremendously aid the information vetting process, helping the society in defeating disinformation.”

“There has been little research carried out in the computational narratology domain, and this paper puts forward an interesting case in identifying shift in narratives with respect to an event to know what resonates in the blogosphere for a given time period,” Bandeli said. “We rely on computational concepts to study these shifts.”

In this paper, the researchers used the migrant crisis in Europe as a case study to observe the change in sentiments of citizens toward migrants from positive (sympathetic and supportive) to negative (angry) and to understand the shift in a narrative on the blogosphere.

“Conventionally, human effort is needed to read text to identify any narrative,” Hussain said. “This paper is a first step in computationally identifying a shift in narratives. Improving on this method and transferring this laborious task to machines will make the narrative analysis scalable.”

In the future, the researchers plan to build a model to identify the narrative in any given online text.

This work is supported in part by grants from the U.S. National Science Foundation, U.S. Office of Naval Research, U.S. Army Research Office, and the Jerry L. Maulden-Entergy Endowment at the UA-Little Rock. Any opinions, findings, and conclusions or recommendations expressed in the study are those of the authors and do not necessarily reflect the views of the funding organizations.