Moving from a humanities discipline as an undergraduate into a STEM field for graduate school was not exactly easy. I am hesitant to recommend this academic trajectory generally, but have found that my undergraduate training in the humanities has been a great source of help, even in a field that seems completely unrelated.

When I first started college, I had no idea what subject I wanted to major in. I had just decided to switch from an out-of-state school, where I had been accepted into their music composition program, to a smaller in-state school after deciding against music composition. In my first semester, I took World Religions, which satisfied a general education requirement I would need regardless of my eventual major. Having grown up in a religiously homogeneous area, I found it exciting to learn about the various religious traditions of the world. One day after class, I asked the instructor about choosing religious studies as a major. His pessimistic response was to pick up a second major in accounting.

During my senior year, I had begun a relationship with my future spouse, was playing drums in a band that had recently been signed to a label, and knew I wanted to go to graduate school, but I was conflicted about what to study. My advisor, the lecturer who got me hooked on religious studies in my second semester, gently suggested that religious studies might not be a prudent choice for graduate school. This was in 2010 when the Great Recession was in full swing, and I was losing my appetite to take the dismal odds on a tenure-track position in a humanities department.

Unsure of what exactly to do, but wanting to do something meaningful, I applied for an AmeriCorps program, City Year, and was accepted. As a result, I spent the next year tutoring students and helping to facilitate an after-school program in a low-income elementary school. My time with AmeriCorps made it apparent to me that there are few, if any, professions more important than being an educator.

At the same time, I was becoming more and more interested in the new technologies that I was hearing about from magazines like Wired. An important topic in religious studies is ethics, and the last course paper I wrote in college dealt with technology and ethics. I felt confident that there would be a growing need for ethicists focused on technology and that my undergraduate training in religious studies lent itself to this direction. Of course, I didn’t know anything about technology. I figured that learning to program would be a good step and started learning a few basics from Codecademy. Trying to combine my interests in religious studies with something vaguely related to technology also helped quell some of my financial anxiety: even if pursuing something related to ethics didn’t work out, at least I would know how to earn a living as a programmer.

By the end of the AmeriCorps program, I was engaged to be married, but I had no clear idea on how I wanted to earn a living. I was lucky enough to find an entry-level position at a health insurance company that offered tuition reimbursement for any undergraduate-level course, including student fees and textbook costs. I got married, worked in a cubicle during the day, and took undergraduate classes in computer science at UA Little Rock in the afternoons and evenings. This arrangement–working full-time and taking classes part-time–lasted for five years, during which I changed jobs several times, from being a programmer at the same health insurance company, to an environmental consulting firm, and to UA Little Rock’s Office of Institutional Research. During this time, I completed the core course requirements that made up the computer science BS, and then started working on a MS.

At some point along the way, I met Dr. Nitin Agarwal after a former computer science faculty suggested that his research interests might align with my own. I agonized about whether to get a MS and try teaching high school computer science (after going through the certification process), or to go for a PhD and try finding a university position. I finally decided to take the plunge and go for the PhD. Starting in Fall 2017, I traded in my salary and benefits for a graduate assistant stipend and haven’t looked back. Despite being in a seemingly unrelated field, I am constantly surprised by how useful my humanities background has been in a computational field.

How my humanities degree has helped me in a STEM field

The greatest strength of a humanities education is the emphasis on critical thinking: questioning ideas and being aware of the contextual nature of most forms of knowledge. In every religious studies or English course I took, students were expected to understand some set of ideas given in readings. Instead of just repeating those ideas and arguments on tests, we were expected to provide our own critiques and interpretations of them, and to offer our own (hopefully) well-reasoned arguments. This kind of critical thinking is not as necessary in computer or information science classes, which instead require more mathematical thinking (though I don’t think these are mutually exclusive). For example, in a computer science class, you do not need to exercise ample critical thinking to understand some algorithm like bubble sort: there is nothing to interpret and nothing to critique; you either understand how bubble sort works, or you don’t. This is because the fundamental objects of study in computational fields are, well, computational, and thus lack ambiguity (I think it’s safe to say that ambiguity is an important ingredient for critical thinking). While an algorithm may be unambiguous, how it’s best applied to answer some research question might be extremely ambiguous, making critical thinking extremely important in a scientific context, where incessant questioning of ideas and interpretations of results is crucial for high quality research.

Importantly, all of this critical thinking work was carried out solely through reading, writing, and discussion. In my humanities courses, I was assigned so much reading that I thought it was unlikely anybody had enough time to stay caught up on it. All of our assignments were in the form of writing. I felt like I was writing essays constantly throughout the entire semester. Final exams always took the form of much larger essays requiring research. As a PhD student, reading and writing are the two most important activities I perform, so having a lot of practice as an undergrad has been a huge help.

Advice for anyone considering changing fields for graduate school

So far, I’ve highlighted the positive side of switching fields between my undergraduate and graduate education. However, there is also a cost to all of this. In my case, I feel the costs have been outweighed by the gains, but this will certainly vary from person to person. Probably the biggest cost will be the additional time it takes you to go from one field to another. While your undergraduate classes in something like philosophy will serve as adequate preparation for the study of law, more drastic changes will likely mean you have a lot to learn before entering your new field. For me, that was four years of post-baccalaureate coursework in computer science and math prior to enrolling in a MS program. If I had studied computer science instead of religious studies earlier on, I could have started graduate school a lot sooner (and thus be further along the career path). Additionally, if you majored in X, but are applying to graduate school in Y, you will have to convince admissions committees that you are not just extremely indecisive; that there is a good reason for your switching fields and that there is some continuity between your past experiences and your future goals.

Some costs may not be as big of a deal if you are interested in finishing your education with a master’s degree. The stakes are generally higher if you are going to pursue a PhD, so any possible costs associated with switching fields should probably be weighted more heavily. For example, given the time a PhD program takes to complete, the time costs of switching fields may end up being fairly substantial: I started college 12 years ago, was only unenrolled for two of those years, and will likely have at least three more years until I finish.

If you are considering a PhD, regardless of whether or not you are switching fields, it is critical that you know exactly why you want a PhD. A PhD program is training in a very specific vocational activity: research. If you think you may want to do something other than research, a PhD is a horrible life choice, given the time and effort required. If your goal is to work at a university, it’s worth knowing that the academic job market is highly competitive. Universities are increasingly relying on underpaid adjunct instructors and state spending on higher education is pretty poor with funding still below pre-recession levels in most cases.  If you’re in a field like computer and information sciences, the upshot is that you can probably bail on research and academia altogether and still find a decent job, though you will have wasted several years that could have been spent earning an income.

But if you’re determined to go for it, then having a broad range of prior experience and knowledge will be helpful. Even if you were in a STEM field as an undergraduate and will remain in a STEM field in graduate school, you should have taken lots of humanities courses for your general education requirements, giving you the critical thinking, reading, and writing skills I mentioned previously. Some schools are limiting the general education requirements for certain students, and that is something to be aware of. For example, if you are in a STEM major, your school may have fewer humanities courses required for your degree. However, this is not really a good thing. Try to take as many humanities courses as you can without delaying graduation. It may even be worth considering a minor in a humanities subject to complement your STEM education more substantially. Also be aware of taking courses that, while traditionally offered in humanities departments, are increasingly being offered in non-humanities departments. For example, business colleges are a great place for learning about business, but I would feel much better taking an ethics class from a philosophy department.

Finally, I highly recommend reading books about writing or academia in general. Two of my favorites thus far are The Scientist’s Guide to Writing by Stephen Heard and The Professor is In by Karen Kelsky. 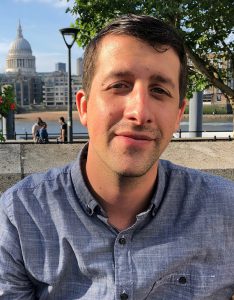 Zach is a Ph.D. student in the information science track of the computer and information sciences program. He completed a BA with a major in religious studies and a minor in English from the University of Central Arkansas in 2010. Since then, he has worked at a health insurance company, an environmental consulting firm, and at UA Little Rock’s Office of Institutional Research before becoming a graduate research assistant in the Fall of 2017. His research interests include complex systems, natural language processing, network science, and information theory. He also has a smaller interest in the philosophy of science. His goal after graduation is to become a professor.

2018-10-02
Previous Post: From Master’s to PhD: When A Research Interest Gets You Hooked
Next Post: UA Blockchain Hackathon: COSMOS Researchers Leading the Way